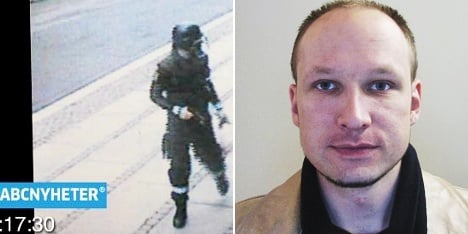 Photo: abcnyheter.no/Politiet
"It was a long interrogation of about 13 hours, which was headed by French police, but during which we were able to ask some follow-up questions," investigator Christian Hatlo told AFP.
Last month, Norwegian police said they had requested judicial assistance from their French colleagues to be able to question Jens Breivik, a retired diplomat in his 70s living in Cournanel, a village in southern France.
French prosecutors agreed and the interrogation was held on Wednesday in Carcassonne, with an interpreter present.
"He answered mainly questions related to the defendant's childhood and their relationship," Hatlo said.
Following the separation of his parents shortly after his birth, Behring Breivik grew up living with his mother and half-sister, who have both already been questioned by police.
Today aged 33, the extremist has said he was a teenager when he last saw his father, who he said cut off contact with him after the son was caught doing graffiti.
When contacted by AFP, Jens Breivik refused to comment on the case.
In an interview with commercial broadcaster TV2 three days after the twin attacks, he said: "I think that, ultimately, he should have taken his own life rather than kill so many people."
On Wednesday, Behring Breivik was formally indicted on charges he committed "acts of terror" when he on July 22 set off a car bomb outside government buildings in Oslo, killing eight people, before going on a shooting rampage on Utøya island, killing another 69 people, mainly teenagers at a summer camp hosted by the ruling Labour Party's youth wing.
Norwegian prosecutors have said that they for the time being intend to request that the perpetrator of the worst massacre on Norwegian soil since World War II be sentenced to confinement in a psychiatric institution instead of prison, after a first team of experts concluded he was criminally insane.
But prosecutors reserved the right to alter that view and opt for prison if new elements emerge about his mental health by the end of the trial.
A second psychiatric evaluation is underway, and should be completed on April 10th, shortly before Behring Breivik's trial begins on April 16th.
In the end it will be up to the trial judges to determine if he should be considered criminally insane or not.