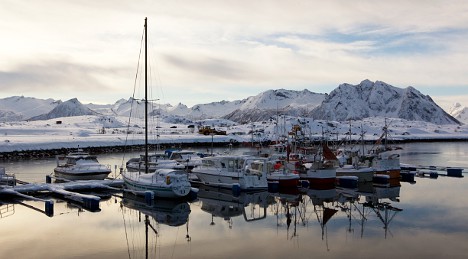 "This issue has split the local community and the nation as a whole down the middle," said Brigt Dale, who recently completed his doctorate on the controversy at the northern Norwegian University of Tromsø.

The question of whether Norway should allow prospecting in the waters around Lofoten's 1,000 or so islands — whose snow-dusted, jagged black mountains rise up like frozen waves in between small, colourful fishing villages — has pitted environmentalists and some fishermen against the country's mighty energy sector.

Many locals meanwhile side with the energy companies, insisting oil is needed to create work and growth in the archipelago, whose 25,000-odd inhabitants are facing a decline in jobs in the vital fishing industry, which has sustained habitation here for thousands of years.

"Everyone agrees that we can create value and jobs, and that people in Lofoten need both," said Erik Karlstrøm, the head of North Energy, an oil and gas company focused on northern Norway, insisting: "The fishing industry cannot maintain the residence pattern in this area."

Oil and gas production along Norway's long coastline has over the past four decades catapulted the once impoverished Scandinavian country to become one of the world's richest nations, ranking seventh in terms of oil exports and second for natural gas.

But while south-western towns bordering the prosperous North Sea fields have long boomed, and wealth has begun flooding into the Arctic region bordering Barents Sea oil and gas fields, a small area sandwiched in the middle remains off limits to prospecting.

Seismic blast studies have shown the Arctic waters off Lofoten could hold around 1.3 billion barrels of oil, but it is impossible to get a real idea without test drilling.

However, Norway's left-leaning government is deeply split on the prospect of Lofoten oil and the idea of an official impact study — which comes before test drilling — on the consequences of prospecting there is so explosive the coalition has put the decision on hold until after the next general elections in 2013.

That is a good thing, according to Ranghild Gjærum, who heads an action committee opposed to oil and gas exploration in the Norwegian Sea waters around Lofoten, and the Vesterålen and Senja islands to the north.

"Opening up to production would be disastrous," she said, pointing to the fragile ecosystem in the area and its importance to Norway's fishing industry, since millions of east-Arctic cod — the world's largest cod stock — come here to spawn each winter.

A major problem when considering oil and gas prospecting off Lofoten is the area's extremely narrow sea shelf that ends in a steep drop of about 3,000 metres.

Since both fishing and potential drilling need to be done in the shallower waters on the shelf, many fear oil and gas installations would heavily encroach on fishing territory.

Oil industry insiders insist seabed installations, not platforms, would be used to ensure the drilling is invisible from the Lofoten islands, which in summer crawl with tourists eager to soak up its pristine beauty, and to avoid disturbing fishing.

Yet seismic blast activity on the shelf in recent years to map the topography and to try to determine what riches may lie beneath the seabed has been seen disturbing fish and has at times blocked fishermen from leaving port.

"It is really hard to imagine how the fishermen will be able to coexist with the oil industry carrying out seismic blasting on that tiny shelf… There isn't enough room," Gjærum said.

Ørjan Robertsen, who heads the local LoVe Petro lobbying group, acknowledged that so far the seismic blasting had not always been handled as well as it could have.

Undoubtedly, the most worrying issue with pumping up oil so close to land is that in the case of a spill authorities would have less than a day to react before the toxic goo reaches shore, compared to many days if the same were to happen in the North or Barents Sea fields.

"The ocean currents are also strong here and different from anything Norway's oil industry has tackled previously," Dale pointed out, adding: "The great fear on the environmental side is that we won't have the competency to handle accidents and spills this close to land."

Increased shipping activity to and from oil installations as well as well as chemicals discharged in the production phase also has environmentalists worried.

North Energy's Karlstrøm admitted that even though the chance of an accident was "infinitely small" thanks to strict regulations and top-notch technology, the possibility of a spill so close to land was frightening and the industry needed to show it was taking the issue seriously.

Experts, he said, were busy working out how to significantly speed up reaction time in the case of an accident, and had found "an obvious solution is to use the fishermen's help."

Many fishermen, who would be compensated for carrying emergency oil clean-up equipment on their vessels, were keen on the idea, he said.

"We basically need to work together and find a solution everyone can live with," he said.