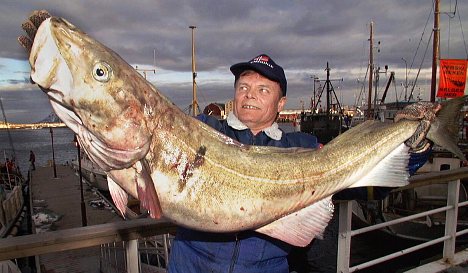 Grabbing a cod head, Alexander Leirvold expertly threads it onto a long spike on a wooden pole before cutting out the pearly-white tongue, considered a culinary delicacy.

"It's easy to do, and I make really easy money," boasts the 15-year-old, wearing heavy black and orange rain gear and blue rubber gloves, as he slices out several tongues a minute at the Marine Fresh fish-filleting factory in the tiny village of Napp in Norway's Arctic Lofoten islands.

Leirvold is taking part in a northern Norwegian tradition that stretches back perhaps 1,000 years and whips the region into an annual winter frenzy: the migration of millions of cod through hundreds, even thousands of kilometres of the icy Barents Sea to spawn here.

These East Arctic cod, called skrei in Norway from the old Norse term for "the wanderer", is a bonanza for fishermen, with locals mad for their fillets, while the tongues are savoured as a culinary delight that even enables kids to earn good pocket money.

Mickael Feval, a gourmet Parisian chef boasting a star in the prestigious Michelin guide, is an ebullient fan and now on his third trip to Lofoten to study the fish.

"The difference with other cod is that this fish has swum so far to get here through the Barents Sea. It has really developed muscles… The texture is amazing," he tells AFP after personally choosing the specimens he will serve with "a French touch" at a gourmet dinner in Lofoten the next day.

Skrei belongs to the world's largest cod stock, estimated at around 1.7 million tonnes in the Barents Sea where it is fished by Russia and Norway.

From late January to early April, skrei make their way along the northern Norwegian coast, with nearly half ending up around the breathtaking but inhospitable Lofoten islands, which were settled thousands of years ago by people drawn by the abundant fish.

About a millennium ago, exports of dried skrei began from the islands, and much of the annual catch is still dried and sent around the world, especially to bacalao-loving countries like Spain, Italy and Portugal.

For the some 25,000 inhabitants of this archipelago, around half of whom still make a living off the fishing industry, the skrei season in the dead of the dark Arctic winter is ironically the highlight of the year.

"When the first skrei come in, we almost have fist fights outside here. Everyone wants this fish," says Bjørn Arne Bendiksen, foreman at Marine Fresh factory in Napp, a town framed by snow-dusted jagged black mountains that plunge straight into the icy green sea.

'Eat it with a clear conscience'

Amid concern over declining cod stocks worldwide, Norway's heavily regulated skrei catch has received the high-level Marine Stewardship Council (MSC) certification for sustainable and well-managed fisheries, as well as a clean bill of health from environmentalists.

"This stock is in very good shape," says Fredrik Myhre, a fisheries and marine conservation specialist with WWF's Norwegian chapter. "You can eat it with a clear conscience."

Skrei migration patterns, however, make for irregular earnings for the fishing industry, which is also concerned over the possibility Lofoten waters could be soon opened to disturbing oil prospecting.

About 75 percent of all fish caught off northern Norway each year is landed before May 1st, according to the Norwegian Fishermen's Sales Organisation, which sets fishing quotas.

"If you don't make money during the winter you're not going to make much that year," Bendiksen says, as large crates of fish are lifted into the factory where assembly line workers swiftly gut them.

Last year, Norwegian vessels pulled in over 340,000 tonnes of cod worth a total of nearly four billion kroner ($709 million), according to their sales organisation, with 50,000 tonnes landed in northern Norway in the month of March alone.

And this year, the sea around Lofoten seems to be teeming with even more skrei, which can mean big money even for small coastal fishing vessels.

"I could take holiday for the rest of the year after working just four or five months. There is so much skrei," 53-year-old fisherman Frann Fridthjoff Nygård says after unloading the day's catch at the Napp docks.

Of course, in the dead of winter with the sun still barely breaching the horizon the work can be gruelling.

"I have small boats, so I'm really dependent on the weather," said the fisherman with a bushy brown mustache who works alone on two small vessels with a total skrei catch quota of around 90 tonnes this season.

Nygård has to work hard to make his quota, but last year bad weather kept him on dry land for 17 days.

For the slew of kids like Leirvold making pocket money cutting tongues, the work is fortunately easier.

Locals go wild for the tongues, which when served — often breaded and fried — resemble large scallops, and the young cutters can rake in as much as 50,000 kroner in a good season.

Children as young as six have been known to take part in this tradition, which Eivind Holst, the mayor of Lofoten's largest municipality Vågan, insists is a good way to build character.

"This is the best school you can imagine," says Holst, who himself cut tongues when he was a teenager, laughing off any notion that the practice amounted to child labour.

Tongue-cutting is an after-school activity that kids beg to take part in, he says, though "school is the top priority."

"But up here, if you're a kid looking to make some pocket money, you basically have the choice between a paper route and cutting tongues."