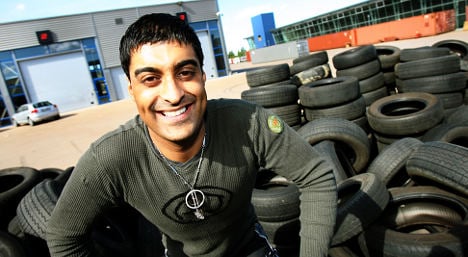 The number of young people claiming disability benefits has risen by 24 percent in just four years to encompass 9,200 people today, according to figures from the Norwegian Labour and Welfare Administration.

In all, 36,000 Norwegians under the age of 30 receive either disability benefits or rehabilitation payments.

The 35-year-old Sharif believes many young people have simply chosen to take advantage of the country’s generous welfare system.

Sharif, whose father came to Norway from Pakistan in 1969, said he hadn’t taken a day off sick in the 17 years he has been working to build up a highly successful tyre business.

Noting that there were of course plenty of hard-working exceptions, Sharif told the newspaper:

”Young Norwegians are lazy. The work ethic here is different than in our neighbouring countries,” Sharif told the newspaper.

He referred specifically to a trend that has emerged in recent years of young Swedes crossing the border in their thousands, lured by more attractive pay packets in oil-rich Norway.

Sharif said his friends in the restaurant business generally viewed the young Swedes as much better workers than their domestic counterparts.

”There’s a reason the Swedes get the jobs. I often hear from my network in the restaurant sector that they prioritize Swedes in the application process.”

Sharif’s assessment of the problem was echoed by Trond Mohn, a veteran industrialist and one of Norway’s wealthiest individuals, who told the newspaper it was unheard of three decades ago for anybody under the age of 30 to enter an early retirement scheme.

Concerned for the country's future, the billionaire Mohn said parents needed to set a stronger example at home if they were to inspire a crop of young Norwegians often lacking in motivation.

”Some have become mounds of flesh. They sit around with four bags of crisps and dip, looking at their iPads,” he told Dagens Næringsliv.