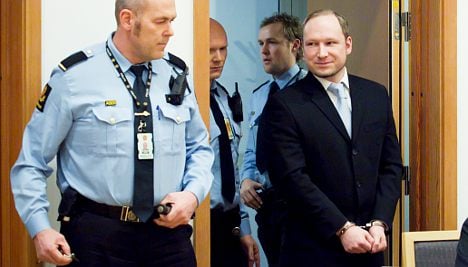 "We have sent a request for judicial assistance, and we hope we will be able to question him before the trial begins" on April 16th, Paal-Fredrik Hjort Kraby told AFP in a telephone interview.

"He does not want to come to Norway, nor to go to the Norwegian embassy or consulate where we could interrogate him, and we have therefore asked French authorities to help us," he said.

Norwegian police would like their French counterparts to question the retired diplomat, who is in his 70s, in their presence.

"The father has not seen the suspect for years," Hjort Kraby noted. "He has not lived with him since he was one year old, and he is therefore peripheral but still important for understanding (Behring Breivik's) personality."

Following the separation of his parents shortly after his birth, Behring Breivik grew up living with his mother and half-sister, who have both already been questioned by police.

Today aged 33, the extremist has said he was a teenager the last time he saw his father, who he said cut off contact with him after he was caught doing graffiti.

In an interview with commercial broadcaster TV2 three days after the twin attacks, Jens Breivik said: "I think that ultimately he should have taken his own life rather than kill so many people."

Norwegian investigators have also asked Facebook to provide them with information about accounts opened by Behring Breivik that have since been closed.

"They are usually very restrictive when it comes to providing this kind of information and they only do so in rare cases. But we have received signals that they want to help us," Hjort Kraby said.

"In this case too, the aim is to map the contacts he has had, who he has talked with and who were his friends," he added.

The spokesman for the social networking website's northern Europe division, Jan Fredriksson, insisted meanwhile that "this case is managed very carefully by Facebook according to all rules and regulations around law enforcement and information management."

According to police, Behring Breivik, who has claimed to be on a "crusade" against multi-culturalism and the "Muslim invasion" of Europe, most likely planned and carried out the deadly attacks on his own.

On July 22nd, he set off a car bomb outside government buildings in Oslo, killing eight people, before going to the nearby Utøya island and, dressed as a police officer, spent more than an hour methodically shooting and killing another 69 people, mainly teens attending a summer camp hosted by the ruling Labour Party's youth wing.

According to Hjort Kraby, Norwegian police are also eager to question a Belarusian woman living in the United States who apparently had a brief relationship with Behring Breivik.

"This case is so huge, it touches so many people and it has shaken Norway so much that we must dig down and leave no stone unturned that can provide answers about the crimes but also about the reason they happened," he said.