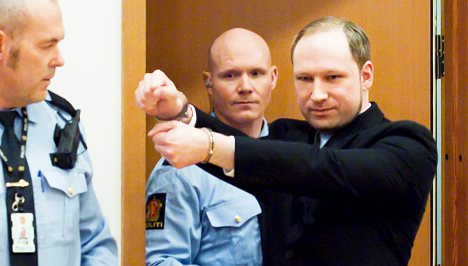 Showing no sign of remorse, 32-year-old Anders Behring Breivik said the massacre was "a preventive attack against state traitors" who were guilty of "ethnic cleansing" due to their support for a multi-cultural society.

"I do not accept imprisonment. I demand to be immediately released," the right-wing extremist told the court before it ordered that he be held in detention until his trial opens on April 16th.

Hollow laughter erupted in the rows where several dozen survivors and families of the victims were seated, when Behring Breivik twice demanded his immediate release.

Wearing a dark suit and pale blue tie, Behring Breivik entered the courtroom and touched his heart with his handcuffed fists, then lifted them straight out toward those seated in the courtroom, in what his lawyer Geir Lippestad described as a "right-wing extremist salute."

"He wanted to show the far right that he is one of them," Lippestad said.

With his blond hair parted on the side and a thin strip of beard along the jawline, Behring Breivik refused to plead guilty but admitted to committing the acts he said were necessary to "defend the ethnic Norwegian population."

"We, the Norwegian resistance movement, will not just stand by and watch while we are made a minority in our own country," he said, adding that he had acted "to defend his people, his culture, his religion."

He also asked to be decorated with a bravery medal, saying: "I want the Norwegian army to recommend me for a War Cross with three swords."

Behring Breivik, who has claimed to be on a crusade against multi-culturalism and the "Muslim invasion" of Europe, set off a car bomb outside government buildings in Oslo on July 22nd, killing eight people.

The massacre was the deadliest committed in Norway since World War II.

During Monday's hearing, Behring Breivik turned around to face the media several times, a smile on his lips.

He reiterated his belief that the court was not a competent authority to try him, accusing judge Wenche Fliflet Gjelsten of being "appointed by those who support multi-culturalism."

"The Labour Party traitors of the nation use asylum, family regroupments, asylum on humanitarian grounds and immigration quotas as tools for Islamic colonialisation," Behring Breivik told the court.

"It's good to see him like that, surrounded by police officers, just a dozen metres away from me," said Magnus Haakonsen, a young Utøya survivor who fled the shooting spree by dashing into the water and swimming away.

"The first time I saw him on Utøya, he was also a dozen metres away but he was pointing a gun, at me. Now, in a way, the weapons are pointed at him, the weapons of justice," he said.

According to the 18-year-old, who escaped two of Behring Breivik's bullets, "a good way to disarm his arguments is to laugh at him."

"He has a completely demented vision of things," chimed in another survivor, Jørgen Bunk, who turns 18 soon.

"I understand that he wants to be released, seeing that he thinks he's a hero. For us, it's obviously completely crazy," Bunk added.

A first psychiatric evaluation conducted last year found that Behring Breivik was criminally insane. A second opinion is expected by April 10th, and if it confirms the first diagnosis he will likely be sentenced to psychiatric care in a closed ward instead of prison.

It will ultimately be up to the Oslo district court to decide whether he is sane and to determine his sentence.