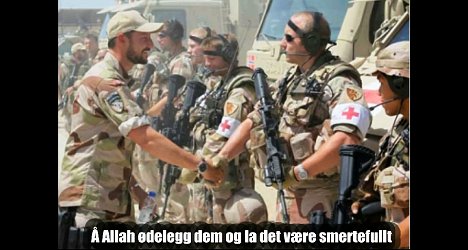 An unnamed 21-year-old old man from Skien, south-eastern Norway, was arrested at his home in the town on January 20th by officers from the Telemark police service and the PTS.

The man, a Norwegian citizen with a Central American family background, faces charges of threatening state officials and incitement to terrorism.

If convicted, he faces a maximum sentence of 15 years in prison.

On Wednesday, police arrested the second suspect, the 26-year-old Islamic extremist Mohyeldeen Mohammad, on charges of threatening state officials. He could spend up to six years in jail if found guilty.

Mohammad previously caused outrage in 2010 with comments made after the publication in Norwegian newspaper Dagbladet of a caricature of the Muslim prophet Muhammad.

Last week, Mohammad drew the ire of the authorities with a message posted on the Facebook wall of Prime Minister Jens Stoltenberg, newspaper VG reports. The message read:

“To: Jens KAFIR Stoltenberg Enemy of Allah, mass murderer and terrorist! Pull the soldiers out of Afghanistan! Allah will punish you for your misdeeds, may you burn in Hell for all eternity!”