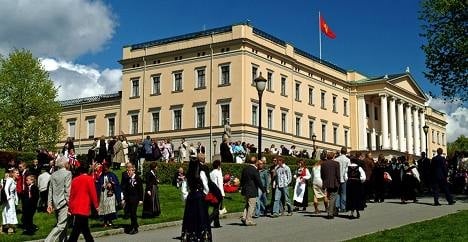 Let two Oslo guides and Jo Nesbø fans take you through a mix of today's Oslo and Harry Hole's universe. In addition to some important tourist attractions, like the Royal Palace, you get to see other and less known parts of the capital.

Oslo guides Mari Atlanta Lunde and Anne Marie Vøien Fleischer will probably tell you more about Jo Nesbø, Harry Hole and Oslo than you ever knew before. The guides have met with Jo Nesbø, who approved the concept. The guided tour takes you to these places and areas in Oslo:

Radisson Blu Scandinavia Hotel Oslo
The tours starts at Radisson Blu Scandinavia Hotel Oslo, behind the Royal Palace. This is in the middle of what the guide calls the land of Harry Hole. The guide presents Harry Hole, and takes you to the top floor of the hotel, where she points out three important parts of the city; 1. Where the criminals live,  2. Where the crimes take place and 3. Where Harry Hole lives.
The Royal Palace
The guide stops two places, first in the park and then under the Royal Palace's main balcony. You will learn more about Norway's political situation, the Royal family and a little war history seen with Norwegian eyes.
Karl Johans Gate (Street)
A department of the University of Oslo is located on main street Karl Johans Gate. The guide presents Hole's love through many of the books, Rakel. You will also learn more about the National Theatre, The Ministry of Foreign Affairs and Hotel Continental. All of which are in the immediate vicinity and play important roles in many of the books.
Egertorget Square
Egertorget is located just behind the Parliament, and plays an important role in one of the Nesbø books. The imaginary hotel Leons is located just around the corner.
Oslo Courthouse
You get an insight to the daily life of those working at Tinghuset Oslo Courthouse, and information on Norway as a constitutional state.
Aschehoug Publishing House
As you stop outside Nesbø's publisher Aschehoug, you will learn more about the different books. Statistics on sales, and so on.
St. Olavs Square
You are back in the land of Harry Hole, and the guide keeps talking about the main character.
St. Olavs Church
Harry Hole is not religious, but the guide believes his love Rakel was a Catholic. You are offered to go inside one of Oslo’s catholic churches.
Vår Frelsers Gravlund (Cemetery)
Vår Frelsers Gravlund Cemetery that is described in many of the books is especially interesting after dark. Many famous Norwegians are buried here, for instance Henrik Ibsen and Edvard Munch.
Sofies gate (Street)
This is where Harry Hole lives, and you get to know more about the part of Oslo called St. Hanshaugen and Bislett.
Restaurant Schrøder
Harry Hole frequents the Schrøder Restaurant (website only in Norwegian) just around the corner of his flat in Sofies Gate. Schrøder is one of few old classical restaurants left in Oslo, with traditional Norwegian food on the menu. Hans Schrøder opened his restaurant in 1925, and the interior is covered with paintings from Oslo in the 1920s.
Underwater pub
Close to restaurant Schrøder is Underwater Pub. This is where Hole seeks rescue when he believes he is not welcome at Schrøder. When the guided tour is over, you can experience live opera performances here every Tuesday and Thursday night.
Price
The guided tour costs NOK 150 for adults and NOK 70 for children.
Languages
The guiding is available in German, English and/or Norwegian.
When
The guide takes place every Tuesday night. Between 3 January and 31 March 2012, the tour starts every day at 5 pm at Radisson Blu Scandinavia Hotel Oslo, and you do not need to order tickets in advance. Before and after these dates, you must order tickets with Oslo Guideburea.
Article sponsored by Visit Norway
Original: Jo Nesbø's Oslo
Url copied to clipboard!