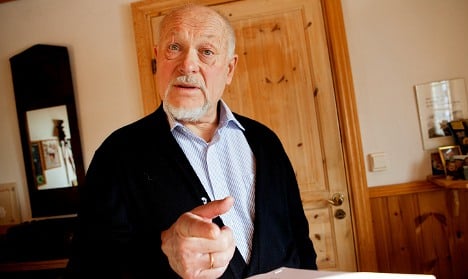 Haakonsen made his comments at an open meeting organized last week by the local branch of the Christian Democrats in Sarpsborg, south-eastern Norway.

In his speech, Haakonsen said the dual attacks that left 77 dead, and an oil rig disaster from 1980 that claimed the lives of 123 people, could both be viewed as an expression of God’s wrath over Norway’s turbulent relationship with Israel, local newspaper Sarpsborgs Avis reports.

“What happened at Utøya was completely meaningless. I’m going contact the local team in Sarpsborg to make it clear that these links are unacceptable.”

Haakonsen, a Christian conservative who espouses much-improved relations with Israel, gave his talk on the topic of “Anti-Semitic attitudes in Norway and among Christians”.

Speaking in Sarpsborg’s town hall, Haakonsen said: “The Utøya massacre can be viewed in the light of the increasingly inflamed relationship between Israel and Norway and the diplomatic controversies of the recent period.”

Haakonsen also noted that the 1980 Alexander Kielland platform disaster occurred shortly after Norway had refused to sell oil to Israel.

“It is thought-provoking that the two greatest accidents in Norway since the war can be tied to Norway’s relationship to Israel. Instinctively, we may ask: Could these accidents have been avoided if we’d had a more positive relationship with Israel?”

Hareide stressed that the views expressed by the writer were not representative of broader strands of opinion within the Christian Democratic Party.

“I’ve never experienced anything like this. I can understand that these statements may hurt, but I also hope that many people see that this is outside the normal way of thinking.”

But not everybody in the party felt Haakonsen had spoken out of turn. Inger Marit Sverresen, the head of the party’s Sarpsborg branch, defended the author she had invited to speak.

“The way I understand it, he doesn’t mean this was a punishment for the young people at Utøya or their families, but that it was a warning to those who run the country, and others who distance themselves from God, that something even worse could be on the way. He wants to warn us,” Sverresen told Sarpsborgs Avis.