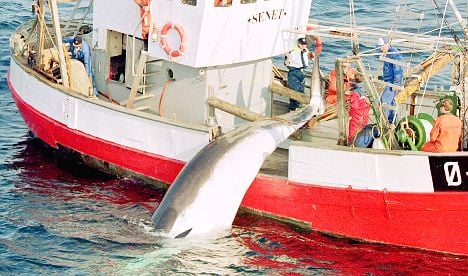 The number of Norwegian vessels actively hunting whales has shrunk from 33 in 2001 to just 19 last year, Norway's Directorate of Fisheries said in a statement.

"The authorities are therefore stressing the importance of the sector itself working to recruit new participants," it said.

Whales have been protected by a global moratorium on hunting since 1986, but Norway does not abide by the ban.

In a bid to sustain a small market, the government in Oslo has gradually increased the annual whaling quotas in recent years.

In 2011, it authorised hunters to cull 1,286 Minke whales, up from 549 of the small whales hunters were allowed to take a decade earlier.

But with the number of whalers in free-fall the industry has increasingly had trouble filling its swelling quota.

In the past couple of years, whalers have not been able to kill more than around half their quota, with just 41 percent of the permitted number taken in 2011.

Environmentalists insist the whalers' failure to fill their quotas is the result of dwindling demand for the meat that was once a staple of the pauper's diet in Norway.

Norway and Iceland are the only countries in the world to have lodged reservations against the 1986 international moratorium on commercial whaling, both claiming Minke whale stocks are large enough to merit limited hunts.

Japan meanwhile uses a loophole that allows killing the animals for "lethal research," but a large portion of the meat also makes it to commercial markets.