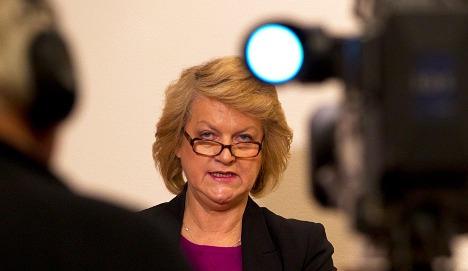 "The threat associated with these groups is worrying today," PST chief Janne Kristiansen said as she presented the agency's annual threat assessment report.

"In recent years, we have seen that these are people who grew up in Norway and were radicalised and who consider Norway and the Norwegian society the enemy," she explained.

The number of Islamic extremists in Norway remains small, but their ranks could expand and they have become ever more operational, according to PST, pointing to a growing trend of extremist youths going to training camps in conflict areas before returning to the Scandinavian country.

The threat from right-wing extremist groups meanwhile remains unchanged, according to the intelligence agency, which stressed that this movement would continue to count few followers in 2012.

"The number of violent right-wing extremists in Norway is still low. Attempts to actively recruit to the anti-Muslim movements have failed so far," Kristiansen said.

On July 22nd, right-wing extremist Anders Behring Breivik, who claimed to be on a crusade against multi-culturalism and the "Muslim invasion" of Europe, set off a car bomb outside government buildings in Oslo, killing eight people.

He then went to Utøya island, some 40 kilometres north-west of Oslo, and, dressed as a police officer, spent more than an hour methodically shooting and killing another 69 people, mainly teenagers, attending a summer camp hosted by the ruling Labour Party's youth wing.

"After July 22nd, we have seen an increase in the number of threats against several members of the authorities and against political parties," she said.

"We do not know if this will continue, but several elements, like the focus on Behring Breivik's upcoming trial, suggest that this will not change immediately," she added.

Behring Breivik, who is being held in the high security Ila prison near Oslo pending the start of his trial on April 16th, most likely acted alone, according to police.

Two psychiatric experts concluded after an initial evaluation that he was suffering from paranoid schizophrenia and was therefore criminally insane, but an Oslo court has ordered a second probe to help determine whether he should be sentenced to prison or receive treatment in a closed psychiatric ward.