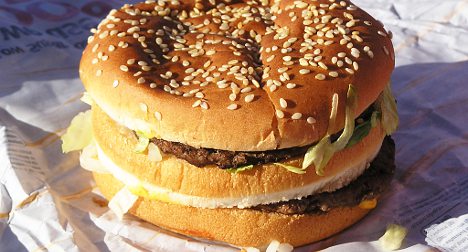 This means Swiss burger munchers pay the equivalent of 2 cents more than their Norwegian peers.

"The exchange rate that would equalise the price of a Swiss Big Mac with an American one is SFr1.55 to the dollar; the actual exchange rate is only 0.96," The Economist says.

Sweden trails Switzerland and Norway on the podium for the countries with the most overvalued currencies. From the bottom up, India, the Ukraine and Hong Kong have the most undervalued bank notes.

The Big Mac index is based on the theory of purchasing-power parity, explains The Economist. Exchange rates should adjust to equal the price of a basket of goods and services in different countries, but this is not always the case.

In order to find out the level of appreciation of currencies in relation to the US dollar, it compares the price of the fast-food chain's star product, which is made from two basic products (bread and meat), with the cost of the same product in another country.

In the case of the euro, the common European currency has lost ground against its US counterpart since July, when the last Big Mac Index was presented. Six months ago, the euro was 21 percent overvalued against the dollar, compared to a 6 percent overvaluation today.