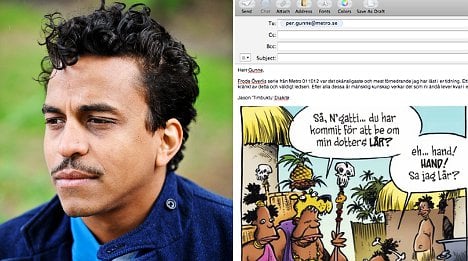 Jason “Timbuktu” Diakité, one of Sweden’s most popular celebrities, reacted angrily to the cartoon published on Tuesday by Swedish newspaper Metro.

“Frode Øverli's comic strip…was the most insensitive and degrading thing I have ever read in your newspaper. It is a crystal clear case of ignorance and lack of insight into what it feels like to be subjected to racism. I feel deeply offended and very sad,” Diakité wrote in an email to Metro editor Per Gunne.

The comic strip features a cannibal chief, his daughter and a prospective suitor.

In a play on the phrase "to ask for someone's hand", the suitor mistakenly asks for the woman’s “thigh” in a cartoon many readers felt was based on racial stereotypes.

”After all these years of human knowledge it seems you remain in the era of steam engines, racial biology and genocide. You should be ashamed of yourself for not knowing better,” Diakité wrote.

And it wasn't just Diakité who objected to the controversial strip. According to Metro, some 60 readers contacted the paper saying they felt the image was racist.

In response, the paper elected to publish an apology.

”Is it OK to make fun of cannibals? Yes, I think so. Is it OK to joke in a way that can be seen as racist? Absolutely not,” Gunne wrote in Metro, adding that the paper has a zero-tolerance policy towards racism.

”With 1.6 million readers, there is always going to be someone who is offended, but this was too many,” Gunne told newspaper Dagbladet.

Artist Øverli is also devastated that the strip has offended readers. He said in a statement that he is crushed by the whole incident as he strongly opposes all forms of racism.

”My comics are a play on clichés and stereotypes from the old days – the culture that gave birth to cartoons – and the exaggerated details in the drawing are a parody of the stereotypes of the time,” Øverli said.

Øverli is an award-winning cartoonist, considered one of the most successful in Scandinavia. His comic strips appear in a number of Norwegian publications as well as the Swedish version of Metro.

According to the artist, cannibals are fantasy figures, akin to Santa Claus or werewolves, and he never thought they would offend anyone.

”It wasn't and never will be, my intention, But seeing as this has been perceived as racist, I naturally offer my utmost apologies,” he wrote.

When The Local reached Metro's Per Gunne, he said that the matter had been settled and was over as far as he was concerned.

He also confirmed that Diakité had accepted the apology.

“Thank you Per Gunne and Frode Øverli for your respectful letters, very big of you!,” Diakité posted on Twitter. 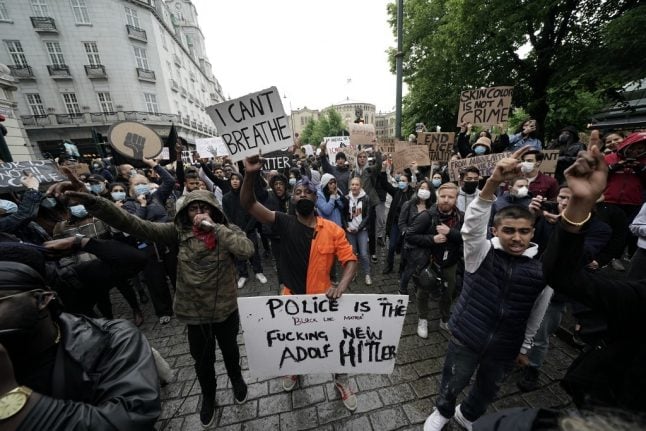 RACISM
‘Nothing indicates that it has led to a major outbreak’: Oslo doctor on anti-racism demo
Url copied to clipboard!