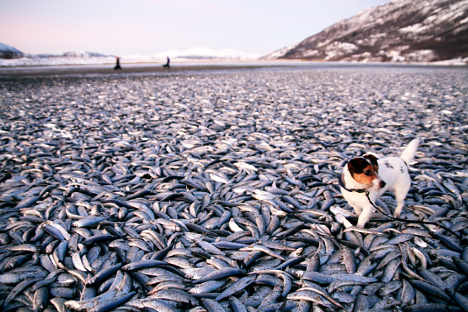 Residents of Kvennes in Troms County, northern Norway, have flocked to the local beach since the mysterious discovery there on December 28th of an estimated 20 tonnes of silver-tinged herring.

Although no one is certain how the herring perished, Ole Kristian Berg, professor of fish ecology at the Norwegian University of Science and Technology, said the huge school of fish was likely hunted ashore by larger species.

“I give a high vote for predators,” Berg told The Local.

He said the herring, well fed on plankton, tend to “just roam around” for a period each winter before migrating south. This makes them excellent prey for hungry predators.

Berg said “pollock, cod and, of course, killer whales” were the most plausible suspects.

For the herring, each weighing in at 100 to 200 grams, the episode showed the downside of schooling.

“Being in a school brings the fish together, but it can also lead to accidents when they stop working as individuals.”

Stressing the speculative nature of his theory, Berg said the herring were probably left to die after they were hunted into the shallowest of waters and up onto dry land.

His view is shared by Aril Slotte, a leading biologist at the Institute for Marine Research.

“There’d be no reason for the fish to swim in of their own accord, but it wouldn’t be strange for them to be hunted,” he told newspaper VG.

He added, however, that the quantities of fish found on the beach were astonishing, and he had “never seen anything like it before.”