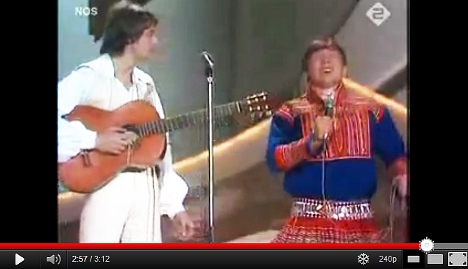 The chant, or joik, used in the film first came to prominence in 1980, when it formed an integral part of Norway’s entry in that year’s Eurovision Song Contest.

In a field of 19 entrants, the song finished 16th. The competition was won that year by Ireland’s Johnny Logan with the song What’s Another Year.

While the joik failed to win over Europe’s music juries, its reappearance this year in horror film The Thing is expected to vastly increase the value of the copyright. And Triumf is determined to have a share of the spoils.

“We Sami don’t know how much money could be involved, or how much we can actually earn from this. That’s why I haven’t reacted earlier,” he told national broadcaster NRK.

The song’s composition is officially attributed to its singer, Sverre Kjelsberg, who was one of Norway’s biggest pop stars in the 1960s with his band The Pussycats.

Kjelsberg was accompanied on stage in The Hague by Mattis Hætta, a member of Norway's indigenous Sami community, who sang the contentious joik segment.

Kjelsberg and Hætta are refusing to comment on the reindeer herder’s fresh ownership claim. Hætta previously told NRK that the matter had been discussed 30 years ago and he saw no need to go back over old ground.

But Triumf is adamant that the joik was bestowed on him as a gift from his aunt, Marit Hætta Ketola, in 1966.

“It’s not acceptable for a Norwegian just to add a few Norwegian phrases here and there and throw a bit of music on top,” he told NRK.

"The joik itself is mine, but the way things stand I’m not currently the legal owner of the joik. That’s why I intend to take the legal route.”