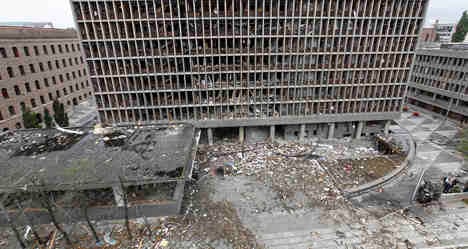 The guards at government security headquarters had trained their cameras on the Volkswagen van. They were in the process of checking its number plates when their screens turned black, according to Norwegian broadcaster NRK.

Two of the guards working on the day of the bombing have spoken publicly for the first time about the dramatic moments before, during and after the explosion five months ago.

"Our attention was drawn to a white van that was parked in front of Høyblokken [the prime minister's office]. The van was very close to the entrance, and we started checking it out with the cameras," said guard Tor-Inge Kristoffersen.

The guards started checking the van little more than a minute after Breivik parking it. They rewound the tape and saw a man dressed as a security guard leaving the car. They could not see from the tape where he went.

The security headquarters is located in the basement of Høybloken, just 20 metres from the site of the explosion. The headquarters was damaged in the attack, and damaged pipes caused water leaks from the ceiling. The guards wrapped their computer equipment in plastic to prevent damage and ensure that the important video footage was preserved.

Kristoffersen argued that the guards have been unfairly criticized in Norwegian media:

"People have said that security guards in the government quarter sat and watched an armed man without doing anything at all. That has been very hard to take. We were working the whole time, and we tried to find out where the attacker had gone. We weren't sitting on our hands, but we just didn't have time to do more than check the registration number," he said.