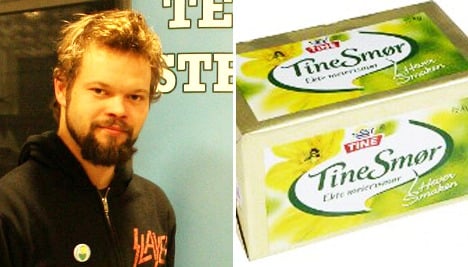 Seeking out the highest bidder, his ad promised a Yuletide status boost for the eventual recipient.

“Real Norwegian butter. Almost unused! Suits any occasion, whether you want to bake or have guests around for porridge. This is a unique product with special qualities. You won’t find it in stores. Be the envy of your friends. Get the smoothest Christmas accessory on your street!”

Giæver said he posted the ad as a joke, never actually intending to sell his treasured stash, but he has had his fair share of serious responses.

“One person was willing to pay 3,000 kroner; another wanted to pay it off in instalments,” he told gd.no.

Giæver said he found it ludicrous that the butter shortage was being viewed as a crisis situation considering the real drama facing several debt-ridden nations across Europe. Anybody responding to his advert has instead received instructions on how to make their own butter.

Unlike Giæver, however, many people really are keen to make some pre-holiday money by auctioning their butter online.

"I want 800 kronor, at least. Then I can give 400 kronor to each of my children's sports teams," one would-be butter vendor, Tove Li, told Norwegian paper Verdens Gang (VG).

But the black market butter isn't just draining consumers of money, it might also be a health hazard, according to Atle Wold at the Norwegian Food Safety Authority.

"Food should be purchased from professional and safe vendors, not in a private environment," Wold told VG.

For Norwegians living close to Sweden, the benefits of cross-border grocery shopping have rarely seemed so great. But Swedish exporters remain less than enamoured with what they view as unnecessary barriers to trade with their nearest neighbour.

"They (Norway) have, as we see it, very restrictive trading politics, borderline protectionist," Jonas Carlberg at the Swedish Dairy Association (Svensk Mjölk), told daily Dagens Nyheter, adding that high tariffs were a way to protect domestic production in Norway.

On Friday, a Russian man was caught trying to bring 90 kilos of butter over the Swedish border to Norway. Having failed to pay duty on the goods, he was forced to hand over the precious consignment to customs officials.

The butter shortfall, expected to last into January, amounts to between 500 and 1,000 tonnes, said Tine, Norway's main dairy company.

The dire shortage poses a serious challenge for Norwegians who are trying to finish their traditional Christmas baking — a task which usually requires them to make at least seven different kinds of biscuits.

The shortfall has been blamed on a rainy summer that cut into feed production and therefore dairy output, but also the ballooning popularity of a low-carbohydrate, fat-rich diet that has sent demand for butter soaring.

"Compared to 2010, demand has grown by as much as 30 percent," Tine spokesman Lars Galtung told AFP.