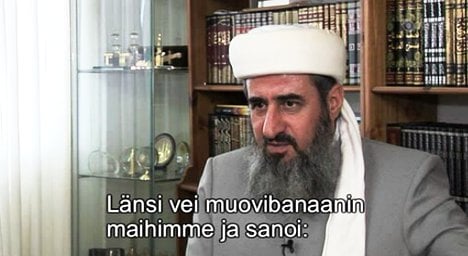 The Norway-based extremist made the comments in an interview with Finland’s MTV3. He also claimed that Islam “will control the entire world” within the next 20 years.

More than a decade on from the devastating terrorist attacks in the United States that left almost 3,000 people dead, Krekar said:

“They have learned nothing from the 9/11 attacks. That’s why they need two more attacks. It’s the only way the Americans will understand that we [Muslims] are people and not animals or slaves.”

“We have just passed a new law stating that anybody who poses a threat to basic national interests may be subject to arrest. There’s no doubt that Krekar should now be apprehended,” he told newspaper VG.

Krekar, the co-founder of Islamist militant group Ansar al-Islam, moved to Norway as a refugee from northern Iraq in 1991.

In the Finnish TV interview, he also spoke cryptically of how European-style democracy would never take root in the Middle East. Likening the export of Western democracy to a "plastic banana", he said it would never work in the Arab world because, unlike the real thing, "you can’t eat it."

He also argued in the three-minute interview that further terrorist attacks were unavoidable, VG reports.

The radical Islamist is set to appear in court in Norway in February after allegedly issuing verbal death threats to five different people, including Conservative Party (Høyre) leader Erna Solberg.