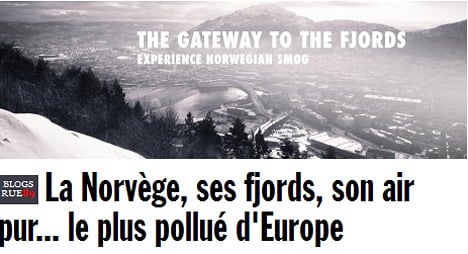 The net newspaper’s two million readers have locals fretting over lost tourist kroner. But others are happy for the spotlight on the smog that makes life hard.

A media issue every winter, the air quality in Bergen is blamed on anchored, ocean-going vessels belching mono-nitrogen oxide, or NOx, gases; metal-studded tires pulverizing city roads; and on the fjords funneling in and trapping heavy sea mists.

“Norway, with its fjords, its clean air … is the most polluted [country] in Europe," the French-language Rue89.com wrote on Monday, adding, “Norway, which boasts about its clean air, has to re-examine its self-image.”

Rue89 blogger Diane Berbain’s entry has local politicians mortified. They worry she’ll convince the thousands of French people who visit picturesque Bergen every year to stay away. Newspaper Bergens Tidende reported 20,000 tourist days worth millions of kroner are at stake if too many of the online publication’s visitors think instead of the photo of Bergen’s smog cloud accompanying the blog.

“I never would have believed the newspaper would put it on the front page, but the editors thought it was very exciting,” blogger Berbain told BT.

“People are surprised since Norway sells itself as a clean country,” she said.

Berbain is a Bergen resident and secretary to the local branch of the Green Party.

Bergen tourist authority boss, Ole Warberg, is worried the gas-cloud blog will trigger a spin-off effect of negative articles about his city.

“It’s this we fear, that it’ll get out of control,” Warberg told BT.

“I refuse to believe that Bergen is so much worse then other cities,” he added.

To shrink its own cloud, Bergen is contemplating fees of 25 kroner [$4.30) for cars coming into the city. Oslo already charges 30 kroner for cars entering city limits. With its dependence on cruise ships, coastal liners and offshore oil and gas shipping, Bergen has appeared more inclined to levy a fee on cars than ships.

For Bergen and Oslo, heavy, NOx-filled winter air is just around the corner. Wretched Bergen air in the winter of 2010 appears to have prompted Berbain’s blog: 200 micrograms of NOx was “the worst in the world” and far worse than the acceptable levels of 40 micrograms NOx.

While thousands of cars pass through the city’s tiny downtown every day, nearby mountains constrain their emissions and those of idling rows of offshore vessels and cruise ships

An Australian Maritime Journal report available online suggests ships burn lower-quality fuel when at quay, and several reports assert the emissions of ships to be the same as “10,000 cars” or up to “50 million cars”, depending on whether the assessment comes from the US Environmental Protection Agency, the European Union or climate consultants.

The EPA, the EU and Norway are already establishing low-emissions shipping zones near land, but these are aimed only at sulphur emissions and not NOx.