“I cried and felt sick, and I had problems looking at the male recruits right in front of my eyes,” said 23-year-old Alice Asplund to newspaper Avis Nordland.

“I can not recommend that other girls go off to the military when it's like that,” she added.

On a September evening, the platoon leader gave the order that everyone should bathe naked together. Asplund’s request to put on sports shorts or bathe at an alternate spot nearby was turned down by the lieutenant in command of the platoon.

Asplund, the air-defence platoon’s labour representative, said a showdown with the lieutenant led to the humiliating scene.

“I said: you can’t force me to bathe naked with all the boys, but then he said that he could,” she said.

Before quitting her military service in the air-defence force she reported the scene to police who could not find evidence of a punishable offence. Local officers of the 132nd Air Wing in Bodø reportedly said the case would be handled by the military’s own system of justice.

The newspaper questioned whether a “moment of field hygiene” required that the woman bathe in the nude with the 30-man platoon. 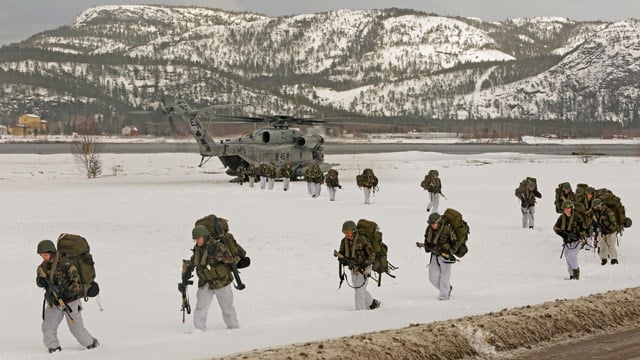 US Marines train with Norwegian, Dutch and British troops during Exercise Cold Response earlier this year. Photo: Master Sgt. Chad McMeen
The 330 Marines, to be stationed on rotation around 1,000 kilometres from the Russian border, will be engaged in training and manoeuvres in almost Arctic conditions, the Norwegian defence ministry said.
The announcement comes against a backdrop of increasing tensions between Russia and the West over Ukraine and the conflict in Syria, although Norway itself enjoys good relations with its giant neighbour.
The US already has vast amounts of military equipment positioned in Nato ally Norway — notably in tunnels dug into mountains — but no troops.
See also: Why is US storing new tanks in hidden Norwegian caves?
“This US-initiative is welcome and also fits well within ongoing processes in Nato to increase exercises, training and interoperability within the Alliance,” Norwegian Defence Minister Ine Eriksen Soreide said in the statement.
“The defence of Norway is dependent on allied reinforcements, and it is crucial for Norwegian security that our allies come here to gain knowledge of how to operate in Norway and with Norwegian forces,” she added.
Before joining Nato in 1949, Norway allayed Russian fears by pledging not to open its territory to foreign combat troops so long as Norway was not attacked or threatened with attack.
This pledge was later amended to allow foreign troops to conduct manoeuvres in Norway.
The deployment, which will begin in January, is a US initiative which Oslo is presenting as a trial to be evaluated during 2017.
See also: Russia irked by talk of US troops in Norway
Last week the Russian embassy in Oslo expressed surprise as the idea of stationing US troops in Norway was mooted.
“Taking into account multiple statements made by Norwegian officials about the absence of threat from Russia to Norway, we would like to understand why Norway is so much willing to increase its military potential, in particular through the stationing of American forces in Vaernes,” embassy spokesman Maxime Gourov said in an email sent to AFP on Friday.
Former senior Norwegian army officer Jacob Borresen said the planned deployment “sends negative signals eastwards”.
The big risk, he told broadcaster NRK, is that the move creates a Cold War-style “confrontation zone”.
In July, Nato announced it would deploy, also on a rotational basis, four multinational battalions to Poland and to Baltic states to deter any Russian incursion.
SHOW COMMENTS
Police uncover industrial espionage on huge scale
LABOUR LAW
Half of all employers ignore labour law: survey
Url copied to clipboard!