OBOS and NBBL — buyer “club” and home-buyer advocacy organization — have stated in a joint letter read by The Local, that hiking up-front costs to buyers will mean fewer building starts and higher prices.

“The new Financial Supervisory Authority of Norway (Finanstilsynet) guidelines will create even greater social segmenting in the housing market,” the letter said.

The organizations furthermore argued that the initiative would lead to further pressure on the rental market.

“The well-to-do will have the means to buy homes while the others will be referred to a steadily more pressed rental market".

For years, ordinary Norwegians could be assured an early bid on a property by joining one of the organizations, a modest advantage in a country where the rich had historically been able to quietly put in offers on homes not yet built.

But the government has been looking for ways to curb the soaring property costs experienced in recent years and raising the required down payment is seen as one alternative.

Raising the down payment is however argued to target first-time buyers without property of their own to earn proceeds from. Meanwhile, a dearth of building starts has driven the price of a 50-square-metre flat in downtown Stavanger to 2.2 million kroner ($390,000).

When it published its guidelines in September, the Finanstilsynet met little opposition for what it said was necessary action to combat Norwegians’ high debt levels and ensure “financial stability”. The home-buyers’ collective letter to the prime minister is the first real resistance to the move, although the government had seen the idea as a way to dampen buyer enthusiasm and drive down runaway home prices.

“It’s a societal problem that there isn’t enough housing in and around the big towns,” said Koteng, adding, “there are no affordable housing starts in Norway today.”

In their letter to Stoltenberg, OBOS — an organization that has fought for housing for it members since a 1920’s housing shortage — suggested the financial community alone had been consulted.

“Important players in the building sector — housing associations, builders, the building industry and realtors — have not been consulted." 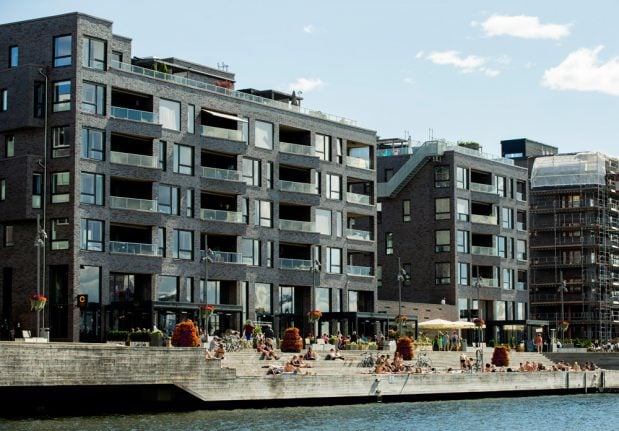 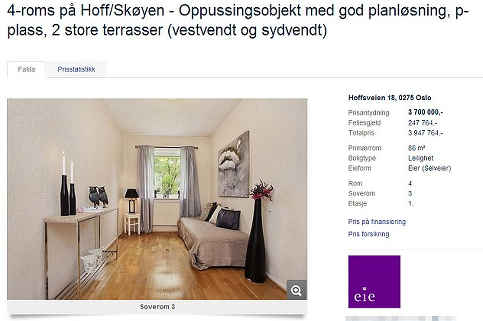 Wenche Behring Breivik's apartment - Eie
The the property went for about a third less than similarly sized apartments in the area, something the real estate agent managing the sale, Marie Mindresunde Moen at Eie real estate told TV2 was prepared for.
"The apartment's history influenced the price, which was not unexpected," Marie Mindresunde Moen at Eie real estate told TV2.
The four bedroom apartment in Skoyen was put up for sale in June, three months after Breivik's mother, Wenche Behring Breivik died of cancer.
Located in Skøyen, a quiet well-to-do suburb in the west of Oslo, it has a parking space, two large terraces, and windows on three sides.
It was put up for sale with an asking price of 3.7 million Norwegian kroner, and sold for just 3.05 million. But similarly sized apartments in the area sell for as much as 4.2 million kroner.
"It's a bit strange to think that Anders Behring Breivik has lived here," the 43-year-old man who bought the flat told TV2.
Breivik has renounced his inheritance from his mother, meaning it is his sister, who lives in the US, who has received the proceeds of the sale.
Breivik's lawyer Tord Jordet has speculated that Breivik did not take his inheritance in order to prevent the money going to the state, which he feared would use it to compensate his victims.
SHOW COMMENTS 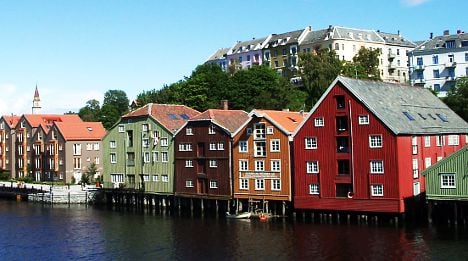