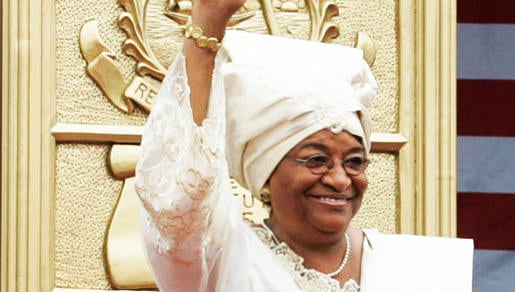 The three women will share the 2011 award "for their non-violent struggle for the safety of women and for women's rights to full participation in peace-building work," Norwegian Nobel Committee president Thorbjørn Jagland said.

Sirleaf, 72, made history when she became Africa's first elected woman president in 2005, taking over a nation traumatised by 14 years of civil war that left 250,000 dead.

Sirleaf dedicated her Nobel to "all Liberian people," but her rival in next Tuesday's presidential elections called the timing of the award provocative and unacceptable because of her involvement with violence in the past.

Her rise to power may never have happened without the efforts of activist Gbowee, 39.

She led Liberia's women to defy feared warlords, and pushed men toward peace by inspiring a large group of both Christian and Muslim women to wage a sex strike in 2002 during one of Africa's bloodiest wars.

She said she found out about the award from text messages after she landed on an overnight flight from San Francisco.

Gbowee said she turned to the person sitting next to her and said "I just won the Nobel." Another person sitting in front of her overheard the conversation and pulled up her picture on his BlackBerry, she said.

"African women in this world, women in general, there is this recognition now that we have our say," she said. "There is no way that anyone can minimise our role anymore."

Tawakkul Karman, a 32-year-old Yemeni journalist and activist with three children, has braved several stints in prison in her struggle for women's rights, press freedoms and the release of political prisoners in her country.

The Nobel jury hailed her for "in the most trying circumstances … (playing) a leading part in the struggle for women's rights and for democracy and peace in Yemen."

Karman, the first-ever Arab woman to receive the honour, dedicated her prize to "all the activists of the Arab Spring" — a reference to the protesters who took to the streets across the Arab world demanding democracy.

She told AFP her prize was "a victory for the Yemeni revolution and the peaceful character of this revolution."

The journalist who in 2005 established a group called "Women Journalists without Chains," has become a leading figure in the uprising against the veteran leader.

The one note of controversy following the awards was struck by Sirleaf's rival in next Tuesday's Liberian presidential elections, Winston Tubman, after observers said the Nobel could tip the polls in her favour after a tough campaign.

"Madam Sirleaf does not deserve a Nobel peace prize award because she committed violence in this country. This award is unacceptable and undeserving," said Tubman, a 72-year-old Harvard-trained lawyer and veteran diplomat, told AFP by phone.

The Nobel Committee stressed though that Sirleaf deserved the honour for her contribution "to securing peace in Liberia, to promoting economic and social development, and to strengthening the position of women."

Geir Lundestad who heads the Norwegian Nobel Institute said the jury had long wanted to make women's rights the theme of its prize and that this year's picks were perfect.

"These three ladies certainly have very important stories to tell," he said, adding he was perhaps most impressed with the least known of them, Karman, who was tirelessly working for human rights and democracy in "one of the most conservative and traditional countries in the world."

Others too voiced enthusiasm.

Norwegian Prime Minister Jens Stoltenberg said the award was "a recognition of women all over the world who are fighting for women's rights … and a recognition of the vital work women do in peace and reconciliation work."

German Chancellor Angela Merkel called this year's choice a "wise decision," pointing out that: "All over the world, there are courageous women who stand up for their rights and for freedom."

And Amnesty International said the award would "encourage women everywhere to continue fighting for their rights."

Since the first Nobel Peace Prize was awarded in 1901, the three 2011 laureates bring the number of women winners to just 15, and they are the first women to take the top honour since recently deceased Kenyan ecologist Wangari Maathai won in 2004.

Maathai, Sirleaf and Gbowee are the only African women ever to win the Peace Prize.

Thursday's laureates will receive their awards, each consisting of a diploma, a gold medal and a third of the 10 million Swedish kronor ($1.48 million) prize money, at a ceremony in Oslo on December 10th.