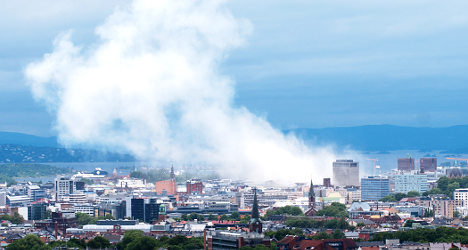 "The court does not find it unreasonable that he be kept in complete isolation due to the risk that he through other inmates could contact possible accomplices … and taint evidence," judge Anne Margrethe Lund told reporters after the hearing.

The court ruled that Behring Breivik, who has confessed to the July 22nd attacks, could be held in total isolation until October 17th, and in custody with a ban on visitors and correspondence with the outside world until November 14th.

New hearings will be held when those periods end and both will likely be extended.

The 32-year-old far-right extremist had himself addressed the court in the closed-door hearing, his lawyer told AFP.

"The accused spoke about the difficulty of being held in isolation," Geir Lippestad said, refusing to provide more details due to a "total gag order" placed on participants in the hearing.

One of the 154 lawyers representing victims and their families, Frode Elgesen, told AFP Behring Breivik had appeared calm and had not been wearing his signature red Lacoste shirt, instead appearing in a suit and tie.

The court had initially ruled that Behring Breivik's appearance Monday could be open to the public for the first time, meaning that media, relatives of the victims, survivors and other people concerned would be able to attend.

But an appeals court last week overturned that decision at the police's request, out of concern that Behring Breivik might try to communicate with any possible accomplices.

On July 22nd, he set off a car bomb outside government offices in Oslo before going on a shooting rampage on the nearby island of Utoeya where the ruling Labour Party's youth wing was hosting a summer camp.

Sixty-nine people, mostly young, died in the island massacre and eight in the bombing.